Saint-Petersburg State University of Architecture and Civil Engineering (SPSUACE) carries out enrollment and academic arrangement of foreign citizens on the purpose of preparing specialists for foreign countries. 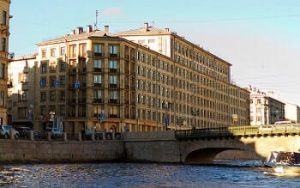 SPSUACE has been teaching foreign citizens since 1946. At present the number of foreign students at the university exceeds 600 people coming out of over 50 countries of Europe, Asia, Africa, America and other countries from the Far East as well as from CIS.

Education of foreign students on bachelor, specialist, master degree programs and post-graduate degrees is maintained according to the same education directions and programs as for the Russian students. The training is maintained either on the contract basis or under the assignment of Ministry of education and science of the Russian Federation.

The academic year consists of two semesters which begin in September and February respectively. Foreign students study with the Russian ones in the same groups.

for foreign students to live. Both hostels are situated near the historic centre of Saint-Petersburg on the bank of the Fontanka river, 123 and Boitsov pereulok 5 10-15 minutes of walk from the university and the nearest underground stations – Sadovaya, Sennaya Ploschad’ and Technologicheskii Institute.
The area where the hostels are situated has a well-developed infrastructure. Near the hostels there are groceries and, shopping centers, sports complexes and clubs, markets, cafes and restaurants with Chinese, Mexican and other world cuisines.
Near the hostel there are historic places of interest, for example the Holy Trinity Cathedral, Nikol’skii cathedral, Saint Isaac’s cathedral, Mariinsky theatre and etc.
The university provides the hostel with all necessary furniture (bed, writing table, closets and cupboards etc) and bedding.
In the basement there a laundry.
Hostels are provided with Internet and cable TV.
Both hostels are supported by twenty-four hour guardians, video surveillance. Entering the hostels from 6 a.m. till 1 a.m. only by presenting the pass.
There is a police station just in five-minute walk from the hostels (Sadovaya street, 58)
Students can spend leisure time in the hostel there a student club “Kirpich” where different entertainments, discos, etc. are held.

Application for education in Russia